An alcohol hangover refers to a group of unpleasant signs and symptoms including nausea, vomiting, heartburn, and dehydration commonly occurring after the intake of too much alcohol. A frequent alcohol hangover and regular intake of alcohol are associated with reduced physical performance, poor liver health, reduced productivity, conflicts at work, and strained personal relations. [1]

Here are some natural ways to relieve the unpleasant symptoms of an alcohol hangover, overcome alcohol dependence, and improve your hepatic health in a safe and effective way.

What are the signs and symptoms of an alcohol hangover?

A hangover is caused due to the excessive intake of alcoholic beverages. A single alcoholic drink may be enough to trigger the hangover symptoms in some patients, while some may escape a hangover entirely in spite of drinking heavily.

The symptoms of alcohol hangover typically begin when the alcohol content in the blood drops significantly and is near zero. The symptoms are the most intense usually in the morning after a night of heavy drinking.

Depending on the type of alcohol consumed and its quality, you may experience other symptoms such as: 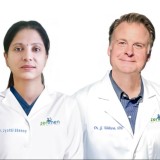